Participating in a Legacy: An Opportunity to Contribute

I first had the opportunity to participate in a mission with the World Surgical Foundation in February, 2016 when I was invited by Dr. Alvear to accompany him to the Philippines. I was in my second year of surgical residency at the time and for a number of reasons was thrilled for the opportunity to go. The first reason is that I love to travel and experience new places and meet new friends. The second reason is that I am always excited for the chance to take part in a charitable mission that benefits people who are in need.  And finally, it had once been a goal of mine to become a pediatric surgeon, and I was excited for the opportunity to assist Dr. Alvear and his colleagues in the Philippines with some of the pediatric cases that were planned.  The trip did not disappoint. Not only did I have the opportunity to participate in dozens of surgical procedures on both children and adults, but also was fortunate enough to travel to numerous cities and towns and make many new friends along the way.  Perhaps most significantly, I was inspired to once again consider pursuing a career in pediatric surgery – a dream that for various reasons I had temporarily set aside. 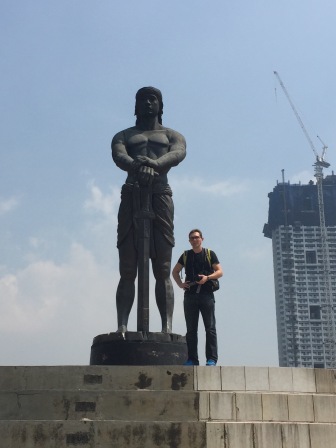 I again had the opportunity to participate with WSF on a mission to La Ceiba, Honduras in October, 2017. This trip had special significance for me because my parents had once lived in La Ceiba and had told me stories about their experiences there. On this trip I again had the opportunity to assist with many surgical procedures performed for patients who many not otherwise have been able to afford medical care.  Moreover, I was again blessed to meet many new friends and reunite with a few whom I had met in the Philippines.  The icing on the cake was the opportunity to meet one of my mother’s former students who had gone on to serve as the minister of health for Honduras.  We concluded the trip with a relaxing day on one of the beautiful islands off the Honduran Coast – a perfect way to conclude an exhausting but incredibly fulfilling week.

I am grateful to the World Surgical Foundation not only for all that they do to provide healthcare to underserved communities in the Philippines and Honduras, but also for the opportunity the foundation has given me to learn and to grow during my residency training. I am especially grateful to Dr. Alvear, who graciously invited me to participate in the mission and has served as a mentor to me in my desire to become a pediatric surgeon.  As it has been said, there are those who talk about the problems in the world, but do not have the will or wisdom to find a solution. Then there are those who have both the will and wisdom to solve the world’s problems and dedicate their lives to making the world a better place. And finally, there are those who fall into the latter category, but in addition take the time to mentor others along the way, so that their impact is not limited to their own generation but continues on for generations to come. This is the legacy of Dr. Alvear and of the World Surgical Foundation, and I am grateful for the opportunity to have played a part.

1 Response to Participating in a Legacy: An Opportunity to Contribute